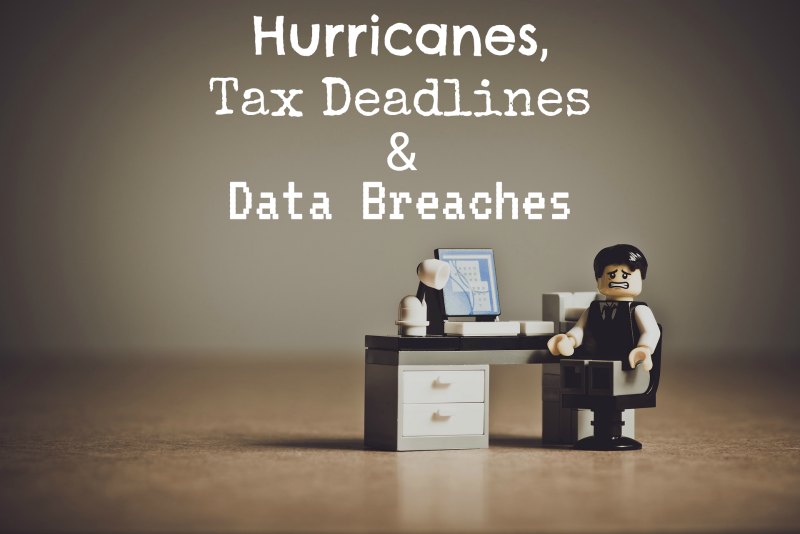 Our hearts and prayers continue with Houston, and with those in the path or wake of the western wildfires. And now, of course with the entire state of Florida. Fortunately, some of the most dire Irma scenarios did not play out, but we are still dealing with a storm that is the 7th-worst such storm ever to hit the mainland since we’ve been recording the data. And with millions without power, and countless numbers displaced … well, it’s no fall picnic, that’s for sure.

The IRS has set up a “catch all” page for those cleaning up from Harvey, Irma, and other such disasters, and it can be found right here: https://www.irs.gov/newsroom/tax-relief-in-disaster-situations. And here’s a recent article that goes into deeper detail about financial and data recovery in the wake of disasters: https://www.accountingtoday.com/news/irs-offers-taxpayer-disaster-planning-and-recovery-advice-for-hurricane-irma

And of course, if you have been impacted by any of these disasters in any way, we are here for you (or for your friends)! Allow us to help you sort through the financial muck so you can better deal with all of the mess of cleaning up other aspects of your life.

To top it off, the news of the Equifax data breach snuck under the radar, but 140+ million people were affected. (More here: https://www.consumer.ftc.gov/blog/2017/09/equifax-data-breach-what-do) Keep an eye on your credit reports in the following months, and this is just another reason to be prepared to submit your tax returns as EARLY as possible (so scammers can’t do so with your data)! And go to the link above to see if you were affected, plus to enroll in some free credit monitoring.

Last bit of “housekeeping”: Third quarter estimated taxes are due on Friday, September 15th (as well as a few other tax deadlines). If you are in one of the designated “disaster areas”, this deadline has been waived, however (see the link above from IRS.gov for more info, if that might be you).

Phew! Lots of details today, which aren’t my favorite with which to open a post here, but I wanted to make sure you saw this information, on the chance you might have been affected by any of it.

In fact, there’s so much information in the above, that instead of my normal tips for managing your finances and Greater Columbus Ohio household, I thought I’d leave you with a story. It’s one of those “old yarns”, and it’s a little cheesy … but I thought it fitting for this week.

Hurricanes, Tax Deadlines in Greater Columbus Ohio and Data Breaches
“The measure of life, after all, is not its duration, but its donation.” -Peter Marshall

A ship was wrecked during a storm at sea, and only two sailors survived. They reached a small, deserted island.

The two sailors were good friends, but they agreed that they should separate to avoid fighting with each other over food and shelter. They split up and lived on opposite sides of the island.

The first sailor prayed to God for food. The next morning he discovered a tree bearing fruit on his side of the island. From a hill, he saw his friend still scrambling to find something to eat. “God must have heard my prayers, but not his,” he thought.

That night he prayed for fresh water, and the next day he found a spring. The other sailor had to ration his own water and wait for rain.

Lonely, the sailor prayed for a companion, and soon after a small dog came swimming up to the beach, the survivor of another shipwreck. But the second sailor was still alone.

And so it went. The first sailor got everything he prayed for, while the second one struggled to survive.

One night the sailor prayed for rescue. And the very next day a ship sailed into sight on his side of the island. He jumped and waved, and soon a boat was sent to shore. The sailor and his dog eagerly jumped in, and the rescuers started rowing back to the ship.

Then a voice came into his head. “What about your friend?” the voice asked.

Believing he was hearing God, the sailor said, “We both prayed, but only my prayers were answered. Why should I do anything for him?”

“You both prayed,” the voice agreed. “But while you prayed only for yourself, your friend asked that your prayers should be answered.”

Realizing the truth, the sailor immediately had the boat turn around to rescue his generous friend.

During this season, let’s remember: we’re not alone.

I’m grateful for the opportunity to serve you, and for your referrals.